Register for online banking
View our registration guide
Forgot Username?
Home > Why Quorum > Recent Events > Quorum Named One of the Best Companies to Work For in New York — Fourth year in a row!

Quorum Named One of the Best Companies to Work For in New York — Fourth year in a row! 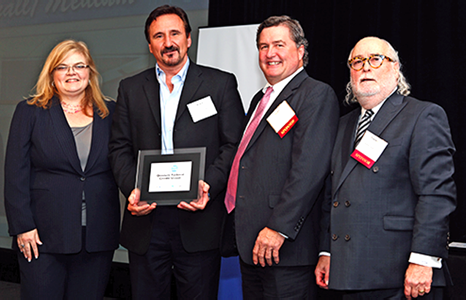 PURCHASE, NY – Quorum Federal Credit Union (QFCU) has been named one of the Best Companies to Work For in New York for the fourth year in a row. This year, the company was ranked No. 15 in the “Companies with less than 250 Employees” group.

The award was granted to QFCU by the New York State Society for Human Resource Management and the Best Companies Group, an independent company managing the Best Places to Work programs on state, regional and national stages around the country. The statewide survey and awards program was designed to identify and honor the best places of employment in New York, thereby supporting the state’s economy, workforce and businesses.

“Our ranking as the one of the best places to work in NY is a source of great pride for our team,” said Glenn Shuster, Vice President of Human Resources at Quorum. “The fact that this ranking is based solely on employee feedback makes this recognition all the more relevant and rewarding. That we have been honored with this for the fourth year in a row tells me we are doing the right things by our employees and continues to demonstrate for us what an engaged workforce we have.”

Fifty companies were named to the Best Companies to Work For in New York list. The companies were assessed on the basis of their workplace policies, practices, philosophies, systems and demographics. Employees within nominated companies were also asked to complete surveys used to measure individual experience.

All 50 companies were recognized and their rankings revealed at the Best Companies to Work for in New York awards dinner on April 30, 2013, at the Albany Marriott.

Quorum Federal Credit Union (www.quorumfcu.org) is headquartered at 2 Manhattanville Road, Suite 401, Purchase, NY 10577. With over 50,000 members, it is among the strongest credit unions in the nation. Quorum, a full-service financial institution, currently serves companies of all sizes and has members in all 50 states. Managed by its members with an elected, all-volunteer board, Quorum (FCU) maintains high levels of service and makes decisions in its members’ best interests.

The New York State Society for Human Resource Management and Best Companies Group (www.bestcompaniesNY.com) formed a partnership to launch the awards program in New York in 2007. In addition to the partnership, the program is supported by the following organizations: Presenting Sponsor Right Management, Supporting Sponsor Jackson Lewis LLP and program partner The Business Council of New York State. The 2013 program is the sixth consecutive year of the awards.